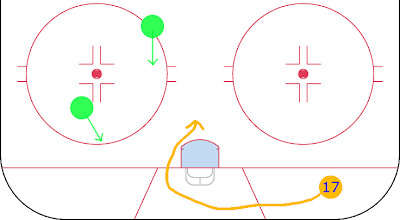 See that 17? That's me playing defense in my own zone. I'm coming back, carrying the puck. I see those two green dots (opponents) coming at me, and I cut in front of the goalie. This is a bad play. I know better than to carry the puck right through the crease. I did this one game, and recognized I was doing this. Later that week, I would apologize to my goalie for doing it. I know it is wrong, but it just happened.

The next week, I talked about it again, saying I wouldn't do it anymore. It was that bad of a play. However, it happened again. This time, we were playing a better team. Those green dots were closer and faster moving. I stick handled in front of the goalie. I realized what was happening and immediately yelled, "Sorry!" to the goalie because I was putting an unneeded stress to the him, going against what I was telling him what I'd do. I would drop the puck and the opponent would put it behind the goalie into the back of the net. Luckily the ref was way out of position, didn't see the puck cross the goal line, and my defensive partner flipped it out from the goal.

I deserved every comment I got that night about it from my team. Why did I make the same mistake twice?

The next night, I was playing forward for the Piranhas against the second place team in the division. At one point I was covering for the defensemen as he pinched in. The opponents dumped the puck into our zone, and I again went back and picked up the puck, and the same play was developing. As I was coming up behind the net, I realized I was doing it again. I stopped, and turned and went back behind the net. As this was happening, I heard the goalie say, "Squirrel....!" as if he was saying don't do it! 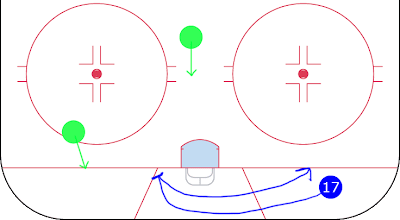 I corrected my mistake. It is a good thing. I played awful on that second night. I was responsible for the only goal against, missed several easy shots at the goal, but the correct execution of this scenario made it a really great night for me. I like learning from my mistakes.