It has been two weeks since my winter season has been completed. I’ve had time to clear my mind, and look at it with emotions cooled off and just to take it in. A lot of times I will write these posts a day or two later to reduce the adrenaline or kind of calm down and just look at things objectively. Surprisingly, in the two weeks that that the season has been over, I still feel the same way as I did the day after my last game.
I walked into the 2014-2015 season with the stars aligned to have an outstanding season as an individual. I was in the best physical conditioning of my life, I felt confident in my skills from competing in the higher divisions the previous 15 months. I put in a lot of time in the gym to be stronger than ever. I was very focused on the game, and wanted to have my best season ever.
I would be playing on two teams. The Piranhas who had a full calendar year of deservingly getting their butts kicked, and the Leperchauns, a team of free agents playing on a Saturday night. The Piranhas have become family to me. I get excited when I get to be on the ice with them, and I always seem to have a smile around them. The Leperchauns were a bit of a younger team, less talented, but showed signs of potential. I really felt I would fit in on the Leperchauns, based on age, proximity of the rink, and a few other things.
Starting out, every weekend I was playing two games. Saturday night then again Sunday night. It worked out really well because I could use that Monday to recover, and then work hard in the gym and be ready for the next weekend. The Lepers were in a league I was not too familiar with, but curious about. The first three games, I skated through the crease in the offensive zone and play had to stop and come out. I’ve had that called on me before, but no league had ever been such a stickler. I learned to make sure to be aware of my surroundings more and more, and it had not happened after that.
Despite feeling like I was in the top 1/3 of the roster skill wise for the Lepers, I could not produce. I had no chemistry with anyone on the team. Even the top skater on the team would not work out well with me. This really bothered me because he liked the way I played, and he knew exactly what I was doing. He even used me as an example for some of the newer players on what to do.
The lack of chemistry and production on the Lepers lead to me going back to being more physical like I had been 2-3 years ago. There had been a couple of times where I felt I should have gotten called for checking or roughing. I had a couple of open ice hits that Scott Stevens would have been proud of.  This did help create space for my team members, and allowed them to put the puck in the net, but I feel like a lot of the guys on the team looked at the stat sheet only. I really don’t feel the stat sheet does players like me justice. I’m more focused on shutting down opponents than putting up points. I started hearing a lot of negativity towards each other in the locker room, and started observing poor behaviors from the players which I could not respect. The fact that team was not winning any games did not help.
It really bothers me when the energy in the locker room is so toxic. It hurt my play. I know I wasn’t looking forward to games with the Lepers, and I started getting cold shoulders from players. One game I didn’t say more than 10-15 words the entire night. My wrist had started bothering me about 6 weeks into the season, but it was a playable injury. It just needed to be taped a bit. Around January, I had a game and saw some behaviors from my team mates that really made me not want to play with the team. There was no friendly banter, no respect for each other. It was like rat hockey where everyone was out there for themselves. I continue playing, and despite trying to tell myself that I’m going to bring some energy to the team, it didn’t work. This drained on me.

While this was all going on for the Lepers, my performance on the Piranhas was the opposite. I scored the team’s first goal this season, and I knew I was going to have a great season. I didn’t have to play strong on my stick, I didn’t have a problem with chemistry with any line mate ever. I knew what I needed to do, where I fit on the team every night. The vibe in the locker room was upbeat at all times, even after a 7-0 loss. It lead to my best season. I started on a solid goal scoring pace (for me it was outstanding), averaging a goal every other game. I honestly was tickled with how well I was playing.
So on a Saturday night, I could go from feeling down in the dumps with a bunch of strangers, to being in an awesome locker room, where I know each player and everyone is happy to be there.
In November, a lot of things started happening off the ice, and stole my focus. It just would not let up either. This string of very bad events and situations would continue until the season was over (as of this writing, we may not be out of the tunnel yet). I didn’t play as well once this stuff started happening, but I kept going and trying.
In January, the drain of the Lepers and the nagging injury of my wrist would be enough for me to walk from the team mid-season. My attendance was not solid anyway because they were constantly having games on Non-Saturdays that I had conflicts with. After I left the Lepers, I never had any regrets. It was the right decision. I would take the extra time (the Piranhas had gaps in their schedule) to heal up and just take care of the off ice issues.
The Piranhas started to slide a bit too. But that upbeat attitude was still there. Everyone was trying, and it was just a positive experience the whole time. I would come to the locker room with that smile on my face every time, despite us not playing our greatest hockey. Then we got a bit of a break. We had a string of games against teams below us in the standings, and the Piranhas went on a tear. Everyone knew it was necessary to just make the playoffs. We would finish the season winning 6 of our final 7 games.
In that stretch of 7 games, we had to play a compressed schedule because we missed some games because of vacations, byes in the schedule and so on. For me, the worst part of that compressed schedule was being sick. I had developed some problems that did not allow me to eat or drink comfortably. I finished the season 12 pounds lighter than when I started, and if you’ve seen me off the ice, you know 12 pounds is a lot for me. I was so sick at one point that I played a full game, but was so dehydrated that I did not sweat. This was the worst point of the season to get sick.
Going into the last game of the season, we still had a shot at making the playoffs against a rough team, who was favored to go to the championship game. The Piranhas had a shortened bench, but the team was in to win this game. Sick, I had my best game I ever played. I played strong on the opponents, protected the puck well, created a lot of space for my line mates, screened the goalie, cycled the puck – just about everything a winger can do. The team would win the game in overtime, but still be eliminated from the playoffs with an 11-9 record. 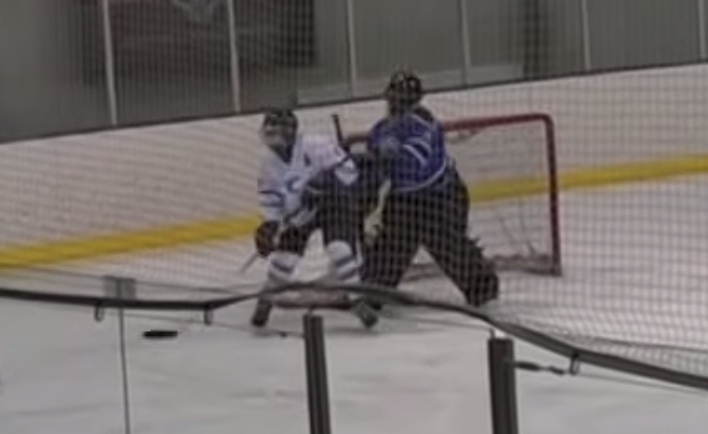 When I look back at the season as an individual, I’d say it was successful. I found a scoring touch with 9 goals in 19 games for The Piranhas, even though for the Lepers (a weaker league) I had 0 points in 14 games. I say it was successful as an individual because I grew significantly in maturity and appreciation for my team and showed that I’m capable of putting up a point or two compared to just making life difficult for my opponents.
I didn’t want the season to end. I felt like the team was getting into a groove. I wanted to play through being sick and keep skating and producing. The high of that final performance of the season from each of the Piranhas, and myself kept me up really late.
Now I have to figure out how to build upon this momentum within the last couple of years.